I'm not panicking, but I am wondering how on earth I'll get everything I want and need to do sorted in time *and* still have a life.
Posted by Unknown at 10:30

One of the million, billion grains of sand in the desert

Although having been around for years, it was on the most-viewed pictures list on The Guardian on Monday - it has just taken until now to find the time to post it.  Damn social life getting in the way, again. ;-)

Email ThisBlogThis!Share to TwitterShare to FacebookShare to Pinterest
Location: The mortal coil

(even more) See ya later

Last night was another see ya later - I had to wave "see ya later" to an American friend of mine who is over here on-tour with work and who I got to see whilst at a gig last night. Sadly I'll not see her when she visits again later in the year, nor her other-half who'd I'd really like to meet. Such is the cost of going walkabout for a year.

See ya later, M.  Have a Guinness for me.

Despite having booked the The Trip months ago I have just paid the balance of the cost for The Trip (the overland bit). Despite this whole thing being very real (given up my job and my flat, packing my life up) it somehow feels that bit more real now I've spent £lots.

An e-mail arrives from Dragoman this afternoon with a subject of "Important Information About Your trip" and in the body "Please find attached details for the changes that we have had to make to your trip and trip notes.  Please let me know if you have any questions". Attached are two PDFs, one is a letter with my name in the filename and the other is a copy of the trip notes for The Trip.
My heart sinks a little - I'm sat in the office looking at my tablet, hoping that this isn't bad. I've got everything planned and, as previously mentioned, Gil and I have had to work quite hard to make it all work.  I can't change it all now.

I open the letter.

The summary: Dragoman is no longer routing the trip via Kazakhstan for reasons I won't bore you with, but they are sensible.  It means I get slightly easier visas (a good thing) and more time in Kyrgyzstan and Uzbekistan (a good thing), at the cost of not doing Kazakhstan - a fair trade and for sensible reasons, if a bit of a shame to not have another stamp in the passport.  The trip is still the same everywhere else and, crucially, the start and end dates are the same.

I don't have to try and rearrange things.

Hello, my name is Robert and I'm a musicaholic.  It has been too long since I last had new music.

The de-junking and packing continues, where today's surprise has been the discovery of another 100(ish) CDs of which only about 30 needed to be encoded, thankfully; so much for a handful.  Another half-crate of CDs I had stashed elsewhere in the flat and discovered, and just when I thought I was getting on-top of all of this.

I've got to get on-top of all this as next Sunday my brother is coming over to collect a bunch of stuff he is taking to use at his place and it all needs to be boxed-up and ready to go.  Goodbye TV, you won't be missed.

After that is the xbox (no TV, no xbox), which a friend of mine will have on long-term loan; given that I'd currently not have a TV again it could be a very long term loan, but time will tell on that.  I'll just be glad to get rid of more stuff.


I've said it before and I'll say it again - de-junk your life, it is something I wish I'd done years ago.
Posted by Unknown at 21:53

My parents have lived in the same house for the last 23 years and in all that time the garage could be politely described as "characterful"; others would describe it as chaotic.  I'd settle for "about as organised as my place was before I started de-cluttering my life".
(Side note: If you are a language person and there is one word to describe this (and not being German, no compound nouns) I'd like to know what it is.)

My parents have volunteered (been volunteered?) to store some of what stuff I keep and as such my dad has had to clear-out the garage - for possibly (probably) the first time in 23 years the garage is organised and has space.  Space soon to be filled with boxes of the stuff I can't (yet?) get rid of, but space.  And all it took was me going around the world - just as well mum didn't know this before now.

I can't take credit for this, or, sadly, provide credit to the originator - it is just another picture via Facebook. 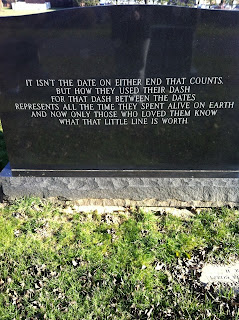 This is how I'm using part of my dash.